Laurel Springs Farm, located within the Middle Fork of the Holston River watershed, has been nominated as Evergreen’s SWCD Clean Water Farm Award Recipient for the Big Sandy-Tennessee River Basin. The farm is owned and operated by Seth and Courtney Umbarger. They currently operate an all natural beef cow/calf with 230 cows. 180 do spring calving and the rest follow a fall calving schedule. They raise their own replacement heifers and usually keep around 30 a year. The rest of the heifers and steers they finish on site and are either sold to a Whole Foods Supplier or slaughtered and packaged to be sold locally. Their goal is to eventually get to sell all their beef to local residents and suppliers. They also raise around 50 chickens and sell all their eggs locally. 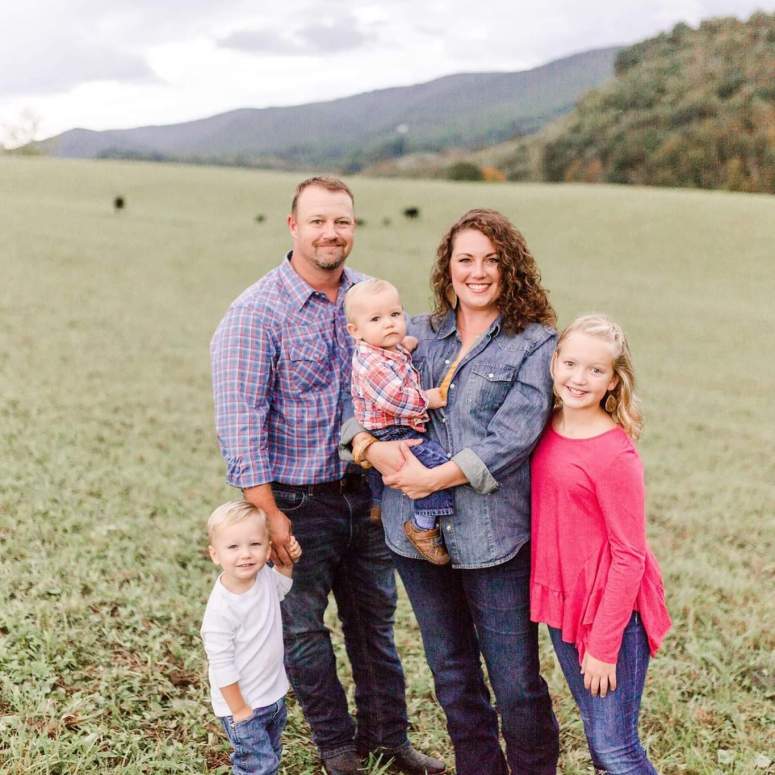 Laurel Springs Farm used to operate as a dairy. The Umbargers participated in a couple of EQIP programs and BMPs through the years to address several resource concerns on their farm. In 2004 they qualified for a new liquid waste storage facility to adequately handle their dairy manure. They were then able to responsibly hold and store their manure to use on crop and pasture land. Under the same contract they implemented 42.7 acres of contour strip cropping and 78 acres of cover crop, crop rotation and no-till, strip-till. They also excluded 3.5 acres of streambank with tree and shrub planting and excluded 2.5 acres of forested land.

Like many dairy farms in Southwest Virginia, they were forced to reevaluate their dairy operations due to economic stress. Laurel Springs switched over from a dairy to an all natural beef farm. After a few years, the farm needed to readdress their natural resources. The farm closed off the liquid waste storage facility but was in need of a solid waste storage facility. In 2012, under EQIP, they qualified for a covered heavy use area with a solid waste storage facility attached. Once again, Laurel Springs Farm was able to use their manure on their crops and pastures. They were able to put a total of 274.8 acres into a Nutrient Management Plan and replanted 2.2 acres of eroded hillside. They still keep up-to-date with yearly soil samples and continue to follow a detailed Nutrient Management Plan. They are currently working on raising the pH of their soil in their pastures back to a more optimal range with lime. 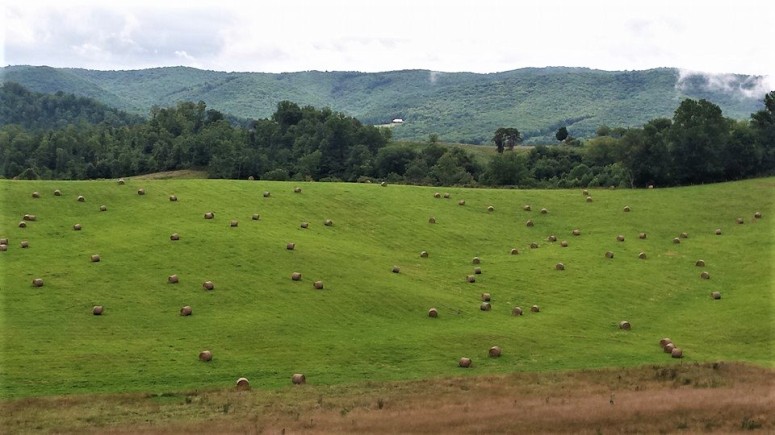 Between all of their conservation practices, Laurel Springs has excluded 42.1 acres of forested land into riparian forest buffers. A lot of their woods lay on steep hillsides that were having problems with sheet and rill erosion with the runoff going into a stream at the bottom of the hill. By fencing their cattle out of the woods and surrounding stream they have solved a lot of their erosion problems and the woodland habitat has greatly improved.

Laurel Spring Farm also had issues with erosion on and around their roadbeds going to their feeding and heavy use areas. A secondary road runs through the farm and some of the eroded farm roads were washing into the main paved road that divides the farm. Through EQIP they qualified for 3,948 feet of Animal Trail and Walkways and 1,216 feet of access road. With the proper grading, gravel, and seeding of critical areas they were able to treat and stop erosion and water runoff issues. They also qualified for a mortality pad so they could properly dispose of their livestock without contaminating ground or surface water through the karst topography.

Due to how the stream flowed on their property, cattle on the south part of the farm had to travel a long distance to gain water access. The Umbargers were not able to fully utilize their pastures due to limited water access. Since they wanted to exclude all of their surface water, they were also able to add in cross fences and a livestock watering system. They qualified for two reservoirs, 18 troughs, 17,060 feet of pipeline and 14,270 feet of interior cross fence. They still closely follow a 175.7 acre Prescribed Grazing Plan and stay strict on their rotational grazing. Laurel Springs also did a total of 28.1 acres of tree and shrub establishment and 23 acres of forage biomass planting. Seth Umbarger routinely rents one of Evergreen’s no-till drills to overseed his pastures with orchard grass and clover and to lay down cover crops on their corn fields. He uses a sacrifice lot near his covered feed area during parts of the year but allows it to recover and seeds it back during the warmer months.

Laurel Springs Farm branched out in 2016 and turned part of their old ice packing plant into a farm store that sells their own naturally raised beef and eggs. In 2017, they partnered with Sprouting Hope Garden to plan and plant an organic vegetable garden. They started selling their vegetables in their farm store and local farmers markets too. Courtney and Seth have also been extremely active in advocating the importance of teaching the public the value of our local agriculture in our economy and what exactly “farm to table” means. Their family has hosted several events with Smyth County Schools ranging from elementary school Farm Field Days to the Chamber of Commerce Government Day for high school seniors. They have also sponsored and organized the Marion Farmers Market Farm to Table Dinner to raise money for the Marion market. 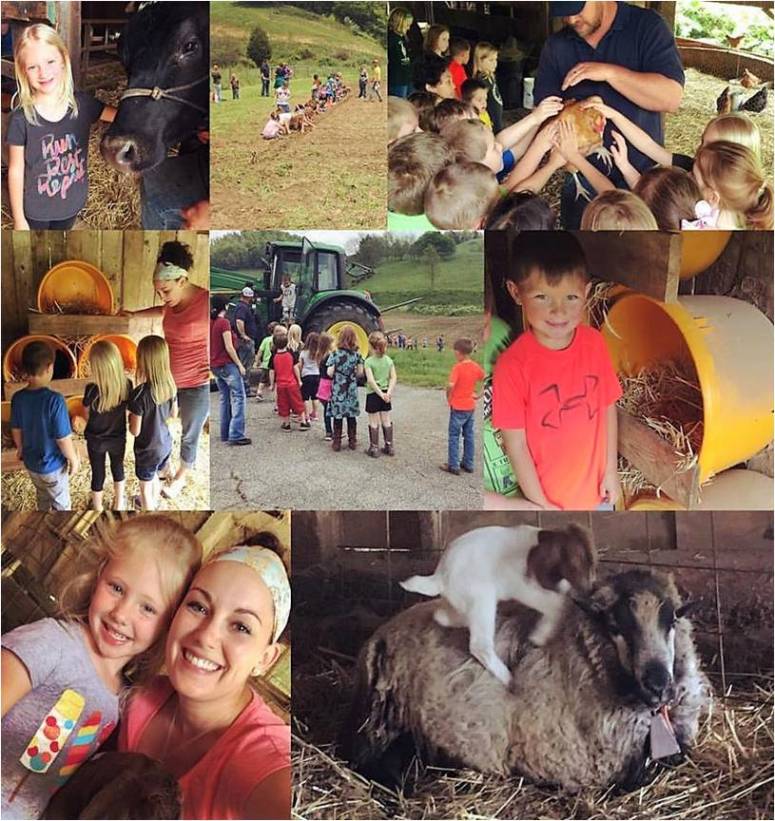 This spring, Seth traveled to China with other Virginia farmers and delegates to work on establishing a trade relationship to sale Virginia raised beef into China’s market. Courtney has also just accepted a position as the region’s Farm to School lead to promote community-based food systems in schools, and to encourage diversifying Virginia’s agricultural economy through Governor Northam’s Children’s Cabinet.

The Umbarger family works hard to keep their farm a successful but also responsible operation within our community. They continue to follow their agriculture conservation practices; but, they also work hard to show other farmers and the public how important conservation practices are too. Seth and Courtney are even extending their reach to help solve nutrition problems in schools by using the state’s strong agriculture community. The Laurel Springs Farm has worked hard to maintain their natural resources so they can responsibly continue on farming for generations to come.

The Commonwealth of Virginia supports the Evergreen Soil and Water Conservation District through financial and administrative assistance provided by the Virginia Soil and Water Conservation Board and the Department of Conservation and Recreation. Smyth County also provides financial assistance to the District. Discrimination is prohibited in our programs on the basis of race, color, national origin, sex, religion, age, disability, political beliefs and marital or familial status.